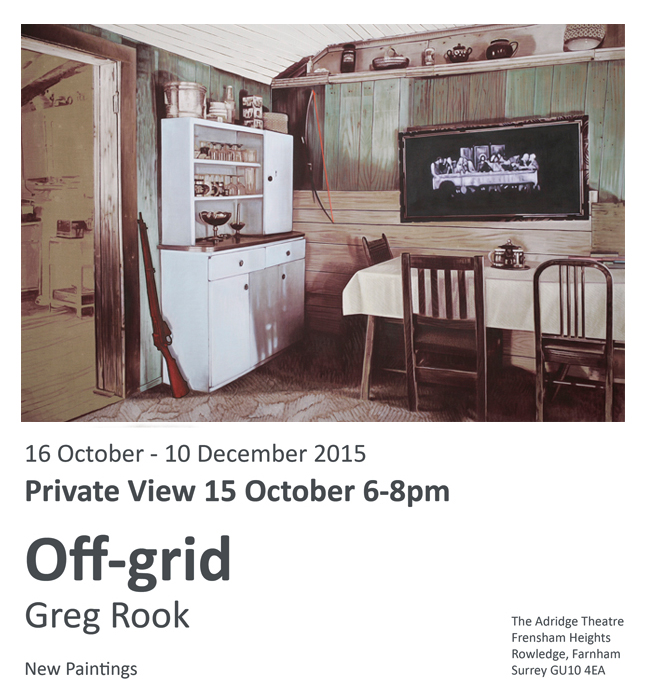 It’s a long time since I’ve been to a private view, but back in October I left the school run to my other half and got the train to the OMT Gallery in Deptford, where I saw these fantastic paintings.

I think they’re beautiful, but also a little sinister and unsettling – you can guess at the relationships between the people in them, but you can’t quite tell what’s going on. It’s like catching a glint of a story out of the corner of your eye.

‘Not so mock heroic paintings of our past potential futures’

I know Greg Rook, the artist – twenty years ago, we were students together – but I don’t know anything much about him as an artist. I’m always interested to know, with writing, how other writers set about their work – cork-lined study? Pyjamas? Kitchen table? Morning? Evening? – and I was curious to find out more about what went into this series of paintings, and how they developed. So I asked Greg if he’d do a guest Q & A post on my blog, and here it is.

What prompted you to make the Survivors series of paintings? (Did you see the recent remake?) Besides the TV series, was there anything else that provided inspiration?

Greg: The original and remake acted as an inspiration in that they seemed like a right wing, apocalyptic reaction to ‘The Good Life’. Both the original ‘Survivors’ and ‘The Good Life’ were first broadcast in 1975 and they function as opposed versions of potential futures imagined in the sixties and seventies.

I was brought up understanding ‘The Good Life’ to be some kind of ideal – affable, well-intentioned making-do and self-reliance were the cornerstone of my moral upbringing – and yet the more I romanticise an agrarian, self-sufficient lifestyle, the more I fear that it will only come about, not through enlightened, progressive thinking, but through disaster and collapse.

What was the process – how did you set about them?

I spend months searching on the internet, through films and in specialist  ‘backwoods’ and ‘survivalist’ books and magazines sourced online, looking for the right figures and landscapes, researching the commune and off–grid movements that have been proposed and that have existed. I hoard, sort and refine until I have a body of images to work with. For this series I found myself particularly drawn to English Georgic landscapes, seventies US communes and Soviet social realism.

With my source imagery I set about creating collages in Photoshop. For this series I would have produced over a hundred from which I eventually paint about a dozen. In painting the chosen few I try to harmonise the different sources and yet let it remain evident that these are collaged from paintings, black and white photographs, film stills and drawings.

Where did you work on them? (What’s your studio like?) What do you have around you when you’re working?

Greg: I have a beautiful studio overlooking the canal in Bethnal Green. I’m surrounded by all the paintings that I’m still working on, as I work on all the paintings in the series at the same time, and a wall of windows watching the boats and towpath pedestrians as they pass. I nearly always have podcasts playing in the background – arts, politics, comedy. I find music a bit overwhelming whilst I’m working, and silence even more so.

How long did they take to do? Was there a particular pattern or routine to the time you spent on them ?

Greg: I work on all the paintings, in stages, at the same time – they are all sketched out, then I work on each one for a day. Some are finished at this point. Some need another day. Some need rescuing and I have to come back to them again and again. As much as I enjoy the freshness of the paintings that work first time, I get great satisfaction from bringing a painting back from the brink of disaster.

The people in the paintings are doing various tasks – some of them labouring away, others not so much. If you were a Survivor, what do you think you’d end up doing?

Greg: Part of the ambiguity in my take on commune living, agrarian life styles and self-sufficiency lies in the fact that, although I romanticise it, I suspect I would be a terrible survivor. Although I might have some of the skills or knowledge, I lack the inclination.

Are the women working harder than the men?

Greg: A previous series of paintings saw men indulging in foot washing, laying on of hands and snake handling. I worry about men’s tendency to get lost in beliefs and self-importance and I predict that women would carry the burden of providing following a collapse. I imagine factions, sects, conspiracies and theories occupying the men’s time.

Do you think these Survivors are going to survive?

Greg: Ultimately we are adaptable and our happiness is relative to our circumstances. If our expectations become limited then our aspirations shrink to fit, and what we require to survive adapts accordingly.

Which artists do you think have most influenced you (and these paintings)?

Greg: There are always paintings that inspire you to paint, and often very different works that are referenced or inspire you to make a particular painting. I love Michael Borremans’ ‘Red hand, Green hand’, George Braque’s studio paintings, Phillip Guston’s ‘Ravine’, ‘Pit’ or ‘Ancient Wall’, to pick a few. But in this series I’ve used Gainsborough, Constable and Turner, whilst perhaps being most directly influenced in the way I approach the paintings by the work of Neil Tate, Varda Caivano, Edouard Vuillard and the drawings of Van Gogh. Then again the colours owe a debt to early Technicolor and the hand tinted photographs of the early 1900s.

If you had to describe your work in 140 characters, what would you say? (I know, I know – I got asked this one about my writing. Mine was, “you may laugh now, but wait for the dying fall”).

Greg: Not so mock heroic paintings of our past potential futures.

Is there a famous painting , or other work of art, you’d particularly like to be able to borrow for a bit and have around the house? (Choose more than one if you like…)

Greg: At the moment it would be ‘Red hand, Green hand’ by Michael Borremans. It makes my hands itch with wanting to paint.

What’s your next project?

Greg: I’m not yet done with this series of work. There will be another show documenting this ‘group’ as they continue to construct their lives.

You can see more of the Survivors paintings and other work on Greg’s website.